Posted at 16:06h in Uncategorized by sitemanager 0 Comments
0 Likes 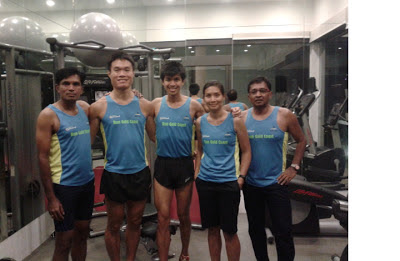 As Gold Coast Marathon is fast approaching, Ashley  and I had to decide to do the 15km time trial on Tuesday, 25th June.
Due to a sore hamstring, we had to abandon the 15km time trial at the 5km mark, where his time stood at 17min 30sec. He was limping after the run. I told him to go for a massage session and he told me that he has done that just a day ago and it is feeling better. I told him to pull out of the time trial and maybe do on another day instead.
We decided to put the time trial day today, 27th June, 2013. We had to abandon some of the strength training that he was supposed to do yesterday.
The next day, we planned for the workout to be done in the evening, instead of morning. We decided on this as this will give him more time for recovery and to run faster.
Our plan was to do a time of at least 52min 30sec, minimum for a 15km run to go for the Gold Coast Marathon 2013.
Our plan was to go at a pace of 17km per hour for the first 5km and then to shift the gear upwards later on. While running, I felt maybe it would be good for Ashley to go a bit faster after the first 8km. I was communicating this to him during the run through gestures and some verbal communication. Ashley told me that he may go faster after the 7th km mark.
At the 5km mark the time stood at 17min 37sec. I knew that this pace will not enable him to do a sub-52min 30sec. He should have done a 17min 30sec for 5km instead. Hence, I had to caution him to be more aware of our goal – a minimum 15km in 52min 30sec.
After reaching the 6th km mark, he gradually started to shift the gear upwards. Ashley reached the 10km in 35min 11sec. It was a 11sec off our targeted time. I panicked at this point.
Some of our Young Champions Programme athletes were there to support and cheer for Ashley at the last 5km of the time trial.
Ashley started to go a little faster after that which allowed him to reach the 12km mark in 42min 08sec. Still, it was 8sec slower from our targeted time of 42min for 12km. There was a total of 3km left. Ashley started to push more and he gave his best shot and ran the last 3km in 10min 11sec, doing the 15km in a total time of 52min 19sec.
After the run, Ashley showed me a gesture that made me to bring up my hand up to do a ‘hi-5’ to him. We did it! A new personal best time for 15km.