Posted at 16:27h in Uncategorized by sitemanager 0 Comments
0 Likes
Ashley Liew – Aiming for sub-2hr 30min in Gold Coast Marathon 2013 since he missed it in 2012.
By Rameshon
I did a mileage of 60km for this week as a preparation for Gold Coast Marathon. Today, I decided to do a long run, after my hip flexor strain had gone down in sensation. I ran 16km in the morning in Macritchie Reservoir and ran in the afternoon about 14km.
When I came back home, I realised that Ashley had just answered the questions that I had given him on his recent 8km race. I told him to finish his exams first, which he did. He is good physical condition. However, anything can happen in a marathon after the 30-32km mark. I hope that positive things happens and everything works out well. As far as I am concerned, as a coach, Ashley is  in shape to do a sub-2hr 30min. This is what I think. Minimum, I hope that he does a 2hr 34min 39min, at least.
I hope that many would go to Gold Coast marathon and aim for a better time! I hope that the training is going very well for many. I hope to join you people there and run. Today’s run has made me confident of finishing the marathon in at least 3hr 20min.
An Interview With Ashley Liew 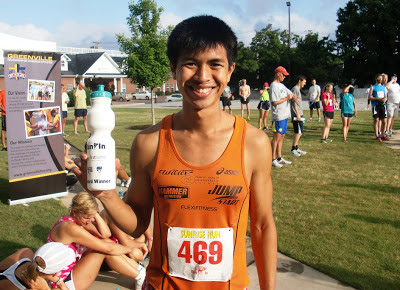 What was the name of the race?
– Sunrise 8km at Simpsonville, South Carolina
Any reason for running this race?
– To race against a high quality field of runners whom I knew would push me hard.
What distance did you run and how was the terrain?
– It was 8km long. It was quite a nice terrain that involved
running through a lot of neighbourhoods. It did have a couple of gentle
slopes, but has the potential for fast times if weather conditions
permit.
What was your time and position in the race?
– Age-group champion, overall 11th. Official time 27m30s.
What was your strategy in the race?
– Start off at a steady yet manageable pace, and then strive
to hit a personal 8km best. The air was quite heavy with humidity (a
different kind from Singapore!), but that was not going to stop any of
the front runners from going all-out. Several of them
went out very hard and I knew they were capable of sub-26min (or even
faster) times, so I stuck to a more manageable pace together with other
runners. With a few hundred metres left I pushed hard like there was no
tomorrow and finished strong.
How is your preparation for the Gold Coast Marathon 2013 race?
– It has been going well. I do miss the workouts together
with the Flexifitness team under Coach Rameshon, but have been making
the most out of my time in South Carolina training-wise.
You have about a month left to the race, how do you feel?
– Firstly, I am relieved that my exams for this quarter are
now over because that has occupied me much of the last week. More
importantly right now, I really look forward to Gold Coast.
Your goal time for the race, any range?
– Sub-2h30m.