Posted at 10:45h in Uncategorized by sitemanager 0 Comments
0 Likes 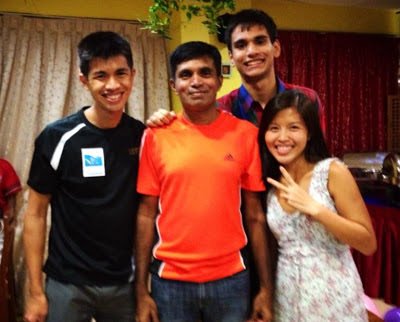 We have done an interview on Chen Ming Ming, who was 8th position in MR 25 Ultramarathon race,  held last year. This year she came in 2nd by covering 83.4km. Coach Rameshon has told me often that Ming Ming is a committed runner in Flexifitness and that she always works hard in training, not forgetting train smart as well. She does her training without fail, even to this day.
While I was doing my own 50.8km run with Flexifitness, I saw Ming Ming doing reps after reps running the MR 25 run. This also shows that she has a lot of potential in her to do 3hr 30min run time to 3hr 45min in a marathon race in the near future. Let us wish her well in her all the best to her training and race in the coming Gold Coast Marathon 2013.

Picture 2 – The ever smiling Ming Ming while running in MR 25 Ultra marathon race, between 7am to 7pm. 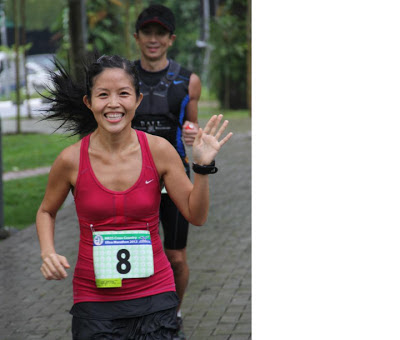 What was your strategy during the race?
I planned to do 8 rounds which means I have to run more than 80km and
be on my feet for more than 11 hours. I decided not to think of the
entire distance but to conquer every 10.4 km at a time because I know
the real race only starts after 50km.

After knowing your result, how did you feel?
I was elated and satisfied that I had done my best for this race.

Are you really satisfied with the time of the race?
My plan was to do 8 rounds in under 12 hours so I am happy that I met
my goal. Actually by my 7th round, the race volunteers already told me
that I am 2nd in placing so I actually didn’t have to do another round.
But I wanted to challenge myself this year because last year I did 7
rounds. This year I want to do 1 more round. In any event, I still had 2
hours left for my last round, so I thought, why not?

Kashken Ray Hodge, Saranniya and others from flexifitness admire your result. How do you feel about this?
I am happy to know that, but more importantly, I want them to know that
seeing them and coach Rameshon during my race and having them cheer me
on really lifted my spirits.


What made/makes you want to take part in ultramarathon races?
Ultramarathons are more fun in the sense that you get to talk more to the other runners and encourage each other.


Between marathon and ultramarathon, which do you prefer to do?
I prefer to to do a marathon because a marathon is a true gauge of
both your endurance and speed. Everything has got to be precise with a
marathon- from your food to hydration and to your strategy. If you go
out too fast, you are likely to blow your second half. If you hold back,
then you may have lost out too much time by the second half of the
race.


How do you find the waterpoint in the MR 25 race?
The water points were very good and were stationed around the 4 km and 6
km mark. There is always enough water, isotonic drinks and fuel for the
runners.


Overall, how was the organisation of the race?
The race was very well organised. Water stations were strategically
placed. There is a bag deposit near the starting point so that runners
have easy access to what they need. The volunteers and organizers were
always friendly and encouraging. Despite the rain, the volunteers and
organizers were standing in the rain guiding and encouraging the
runners. Kudos to them! 🙂


Are you running any race in the near future, and where are you thinking of
going to?
– I plan to do Gold Coast Marathon, Standard Chartered Marathon and of course the MR 25 Ultramarathon again!