Posted at 15:56h in Uncategorized by sitemanager 0 Comments
0 Likes

Gold Coast Marathon 2013 – We will continue to run the race despite the haze using adapted training. 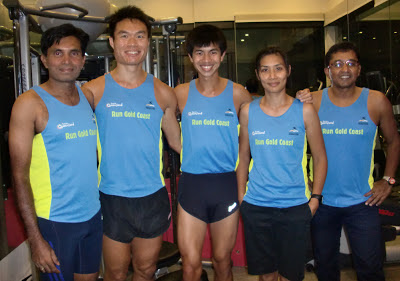 Ranjit’s friend, Ganesh is also running in the coming Gold Coast Marathon 2013. Hence, with 5 people in our group, we decided to take a group photo before going for Gold Coast Marathon 2013.
3 of our athletes will meet us in Gold Coast Marathon and they are now in overseas. Two have told me that they will be running. One of them have migrated to Australia and will be there for the Gold Coast Marathon.
As we have Ashley Liew back from USA, just after his Final Exams, we decided to take a photo. I took out my camera to take the photos of our Flexifitness athletes/coaches going for the race. I am a fan of Ashley Liew and was happy that he did not miss this photo taking. I am also pleased to do a write up in this blogpost, since Marcel Sng, our official reporter, is busy with his school work.
Personally speaking, I saw the singlet that they were wearing and they looked very nice on them. It has ‘ Run Gold Coast’ printed on the singlet. The good thing about the group is that 2 of the 5 of them are coaches.
Despite the haze, it was found that these athletes did not stop training but find alternatives to train. I was told by Coach Rameshon that Lim Thow Wee will attempt a time of 2hr 48min for the Gold Coast marathon, although, a minimum of 2hr 55min flat is the least that the former wants.
Coach Rameshon told me that his aim for Ashley Liew in the marathon is a 2hr 28min. If Ashley is not able to do that at least the 2hr 35min 39sec would be a time that we feel that he should go for. At least a personal best time!
Norshidah is,  for the first time, about  to run in Gold Coast marathon and she is excited about it. She did not get much training but she was some how was able to do some form of training for the race.
All the five athletes/coaches will be running in the race and I am in fact very excited about their race time.
www.runningcoachsg.com