Posted at 15:41h in Uncategorized by sitemanager 0 Comments
0 Likes 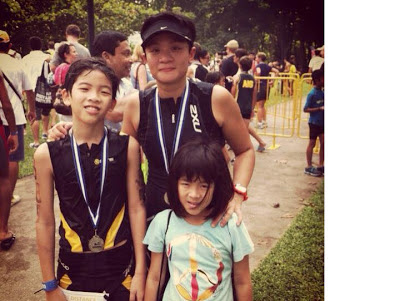 Flexifitness Athlete Jasmine Tan, 33, a graphic designer, ran our 8km hard run about one and a half-month back. That was around the beginning of May 2013. She told me that she likes biathlon, duathlon and running as a passion. She also told me that she usually loses out in running most of the time.

In the steady run of ours, while others have finished, I realised we had to wait very long for her to finish. I personally felt that this was a slow time. Nevertheless, things changed for the better over time. She did 53min for the 8km run. Subsequent week, for following week, she did the 8km run in 51min plus.

Over time, weely, I found that she was meticulous in doing all the things I want her to do. Three weeks back, she did 29min plus for the 5km run. I was shocked to see her surprise progress. I started to ask her on her improvement and she told me that she was doing some of the drills that I had shown her.

As for me, I felt that this lady is very dedicated in doing what is supposed to be done in running. That was why she was improving tremendously. For the two weeks ago training, she did 30min for 5km, as I told her not to push as her race was just 4 days away and I instructed her on what to do for the next few days before the race. “I followed them religiously,” was the answer she gave me.

I told her that she was fated to join us as she told us on how she may not have joined us as she was not aware of us.I simply gave her the answer that if it is fated, she will be with us. If not fated, then, she won’t be with us. Also, we feel honoured to have a disciplined and dedicated biathlete in our group.

My recent interview with her showed that she had been yearning to do well in the 5km and 10km run and she had been training very hard for long from the past, sincerely.

For me, my amazement is that she had value-added her improvement and she has made us proud. Last week, she was able to bring her 5km time to 27min 24sec. This is the greatest progress person in our programme in terms of value add. From a slow runner, she is now learning to run fast. She would also like to thank Ming Ming for pushing her to do this big improvement time for the 5km hard run.

I have asked her on what is her next step as I can see that she is about to do 26min plus for 5km. She told me that she is just aiming to run faster over time. I wish her all the best in our programme. To me, if you do your homework and be sincere in your training, the rewards will come over time. This is natures law. Even a little thing you do will be rewarded, if not now it will be later on.