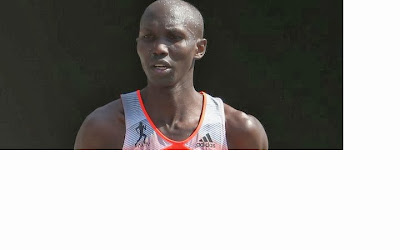 After spending two years being known as the man who came agonisingly
close to matching the marathon world record, Wilson Kipsang of Kenya
broke that record handsomely in the 40th BMW BERLIN-MARATHON
on Sunday morning, clocking 2.03.23, thus taking 15 seconds off
compatriot Patrick Makau’s 2.03.38, set in this same race two years ago.

Barely a month after Makau’s world record, Kipsang, now 31 won the
Frankfurt Marathon 2011 in 2.03.42. He went on to win the London
Marathon 2012, but was relegated to third in the Olympic race in London
three months later.

Now Kipsang is on top of the marathon mountain. And Berlin’s cachet
of possessing the fastest marathon course in the world is again
emphasised. This is the eighth world record on the course in 15 years.

In only his second marathon, Eliud Kipchoge, former world 5000 metres
champion, finished second in 2.04.05, improving his best by a minute
and a half; and another Kenyan, Geoffrey Kipsang (no relation) finished
third in 2.06.26.
http://www.bbc.co.uk/sport/0/athletics/24322574