Posted at 06:02h in Uncategorized by sitemanager 0 Comments
0 Likes

MOE Olive Run 2013 – An annual event that is attracting many, even family members of  Ministry Of Education, a right step for 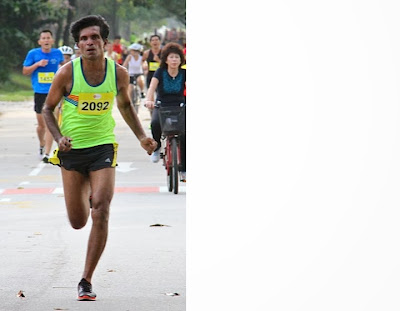 It was at 7 15am when I passed by car – park E1. Later on, I was at car-park E2 and I saw a big jam. Immediately, I made a u-turn and went towards car – park E1 to park my car and do my stretching there. By the time, I parked my car, it was already 7 30am.
I jogged to the starting point at Angsana Green. I was doing some loosening exercises as well. There was this necessity for me to go toilet but this was shelved as I saw a long queue for the toilet.
At 7 25am sharp, I was near the start point. My friends were there, not in front but at the second or third row, just 1 metre behind the front runners. I wanted to go to the front but I decided not to as I did not intend to push the 1st 1km by going out fast at the start. Something told me to go slow at the start and increase speed over time, especially towards the end.
I was not able to stretch much. When the 10km group had gone, it was the turn of the 5km runners to run. We ran at about 7 45am as the guest-of-honour flagged us off for the race.
While running, I realised that the route had changed. I decided to follow my friend Shang but was not able to as he seemed fast enough to move forward.
I was not able to follow from the first 500m. During the run, I found that it was a good thing to do by putting a marker for every 500m of the route. At the 2.5km mark, my time stood at 9min 29sec. I went on like that and slowly started to pick up my pace. This went on like this for a while until I reached the last 1km of the route where I surged forward and I was with my friend Shang. I finished the race first for men closed veteran above 45 years of age with a time of 19min 41sec. I collected the champion medal during the prize giving ceremony. I won $400 cash by becoming first for the race.
I saw Ang Chee Yong who came in first in his category. Hoong Wei Wong was there also and he came in 6th position in the 10km race.

During the race, about 5 to 6 people supported me by cheering loud for me and I want to sincerely thank them from the bottom of my heart for having done that.