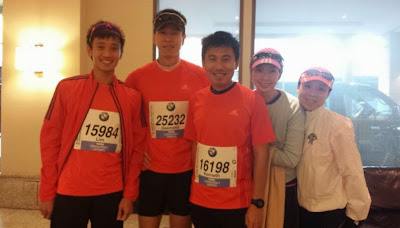 I
can fully remember that I have overtaken Jennifer Quek, aged 41, in all
tempo runs, except for 15km runs. Jennifer has recently done a sub-1hr
19min for 15km twice that made Coach Rameshon to utter that she has the
capability to do a sub-4hr for the Berlin International Marathon race,
maybe even a sub-3hr 50min so long her mind is strong. Judging from her
race time, I believe that she must have used her mind. 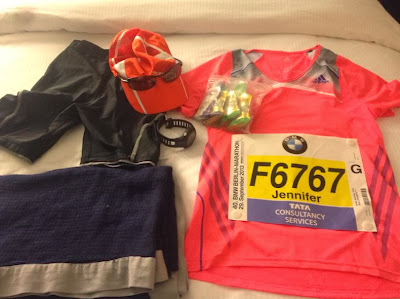 She
has been closing in on the gap between her and me our tempo runs
between the distance of 8 to 10km recently. In the Army – Half marathon
held in Singapore, a month ago, Jennifer did a time of 1hr 51min 31sec
for the race, breaking her half-marathon time significantly by nearly
8min. In the past, her personal best time was 1hr 59min 55sec in Great
Eastern Half-Marathon race 2012.

As
for this year’s Army Half-Marathon 2013, I was one of those who was
there to see her complete her race and also to feel happy for her. She
is one of our Team Flexifitness athlete who has been making vast strides
in running recently. It is all progress, progress and more progress by
her. She has this winning formula in her. I also note that she is very
careful about training and diet. There are few things that I have picked
up from her.

Very
recently, I have written about her interview where she gave the below
-mentioned data to me  late. I was not able to put it up. What a waste!
There were important information of her previous timing.
However,
since she has done faster than a sub-4hr personal best time – a 3hr
48min, I have collected the data that Jennifer had sent to Coach
Rameshon on her previous data of running achievement. Judging from her
time, I felt that it was good that she did not waste time anymore  and
came under this program to improve. While running the Berlin
International Marathon, at the half-way mark, she has bettered her Army
Half -Marathon personal best time by 48sec. This is phenomenal effort by
her. She did a time of 1hr 50min 53sec at the half-way mark. It was a
great feat by her. Nearly a month of improvement of her personal best
time in her half-marathon while running a marathon. I can’t believe it!
Having
said that, I would like to put up the previous blogpost on Jennifer’s
interview in this article and the below – mentioned data for people of
all walks of life to see and get inspired by this veteran lady who runs
like a young lady. I would like to say, well done!

Just
I will put up a comparison of the timing of the runners who ran the
Stanchart Marathon 2012, especially the veteran runners time.