Posted at 15:44h in Uncategorized by sitemanager 0 Comments
0 Likes

Appreciating the person who started me into running

Picture 1 – Staff of QSS in Olive Run –  Standing on my extreme right is Mr Wong, our coordinating officer for the race and on my right, nearest to me, in white t-shirt is Mr Benjamin Lui Seng Cheong 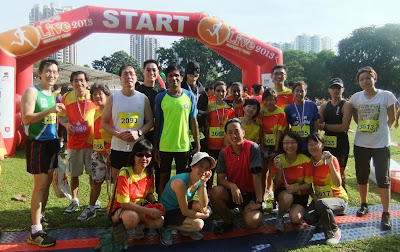 I was very glad to stand beside my former teacher in-charge and coach of St Joseph’s Institution. In Queensway Secondary School, he is now the principal. His name is Mr Lui Seng Cheong. Even when I told the Queensway staff that I started running when I was training under him, he humbly told them that he was just a teacher in-charge.
As a matter of fact, he was my coach as well and brought SJI to 3rd position in National Schools’ Cross Country. We were not able to get this kind of position in the past. We did it with his great guidance.
The good thing that Mr Lui brought in training is variety in training ground and in training itself. It was fun and exciting training under him. It was from him that I got the momentum to continue training consistently and take running as a life long activity.
In appreciation of what he has done for me I am dedicating this blogpost to him. I also would like to inform all about Mr Terence Yeo who is the vice-principal of Queensway Secondary School for having done 100km in Sundown Marathon 2013. He is in the photo seated in red t-shirt. I find him inspiring and motivational to do this feat. He is now my idol in the school.